Newsflash 18-Nov-2000: The north Bay City Freeway may be coming back to life! An engineering study for a tollway is underway.

Houston has had a surprisingly small number of freeway cancellations compared to most large cities. In fact, new freeways that were not included in 1960’s master plans have just about offset the cancellations. There have been few cancellations for two reasons. First, Houston always had a realistic freeway master plan, unlike Los Angeles or Dallas. Second, Houston constructed most of its inner city freeways prior to the early 1970’s. Only two inner city freeways remained to be constructed as of 1970 (the Harrisburg and South Freeways), and one of those was cancelled.

Of Houston’s four cancelled freeways, only one is permanently dead (the Harrisburg). It is possible , although unlikely, the the Bay City Freeway / Fort Bend Parkway north section, the Alvin Freeway south section, and the Red Bluff Freeway will be built. The Red Bluff Freeway’s feeder roads were built about 30 years ago, and adding the main lanes would be a simple job.

Harrisburg Freeway, 225 from Loop 610 to downtown

The Harrisburg freeway is the only cancelled freeway that is permanently dead. It was cancelled in the mid 1970’s, but was not officially removed from master plans until the early 1990’s. A 1987 master plan still included this route.

The Harrisburg freeway has a rather dramatic finish, similar to the Marina Freeway in Los Angeles. A full stack at Loop 610 was constructed in the early 1970’s. Just east of the stack, the freeway comes to a grinding halt.

While the freeway was still in the planning stages in the early 1970’s, this block of text appears in the Houston/Harris County Transportation Plan, published in November 1971. It turns out to be ominously predictive of the freeway’s demise, in spite of the optimism expressed.

“An example of the effort being expended in fitting a modern freeway facility into the area it serves with all of its socioeconomic and ecological ramifications is the proposed Harrisburg Freeway (SH 225) between the Eastex Freeway (US 59) and the East Loop (IH 610) in Southeast Houston. Because of the built-up area through which it will pass, the freeway poses a challenge in social and economic fields as well as the engineering design and location of the facility. A multidisciplinary study team was organized in the summer of 1970. The team includes an architect, a research economist, an urban sociologist, a landscape architect, an urban planner, and a public information specialist in addition to a staff of designing and maintenance engineers.The team will develop rational objectives and detailed alternatives based upon a comprehensive analysis of the social, economic and environmental needs of the community. Although the study is still currently underway, the team is confident, that through the multidisciplinary approach and design-team concept, the Harrisburg Freeway will become a facility which will not only be a source of convenience, but also one of pride to both the City of Houston and the neighborhoods adjacent to the proposed project.”

This is one of Houston’s earliest doses of “politically correct” language regarding transportation and low-income communities. The design effort was not enough, and within a few years of the publication of this text, the 1970’s anti-freeway movement that decimated freeway plans nationwide finally claimed its first victim in Houston.

A story appearing in the August 8, 1999, edition of the Houston Chronicle provides more information on the events surrounding the freeway cancellation.

“Texas 225 may be the area’s shortest freeway, but it wasn’t meant to be so stubby. As originally planned, the road sometimes called the La Porte Freeway would have crossed through the industrial towns of La Porte, Deer Park and Pasadena and kept right on rolling west into downtown Houston.Thousands of residents of Houston’s East End had other ideas in the early 1970s. In a rare move, the state highway department caved in to their protest that the community would be ripped in half. All serious thought of completing the freeway was dropped by the late 1970s. The dotted line up Harrisburg Street was quietly erased from state planning maps only a few years ago. Today the freeway runs west from Texas 146 to the East Loop. Traffic continuing into downtown Houston must take a small southern jog on the Loop to reach the Gulf Freeway.
.
.
Texas 225 is one of the few area freeways where no new construction is planned or even contemplated. What the road is, it will be.

In 1971, residents of the mostly Hispanic East End of Houston had no such assurances. Thousands signed petitions and organized against the Harrisburg Freeway, as it was known, that would have followed an abandoned rail line two blocks north of Harrisburg Street. The new highway would have bulldozed 1,200 houses and apartment units.

State engineers insisted that the extension was the only way to relieve overcrowding on the Gulf Freeway. Many East End businesses supported the extension, as did the local City Council member, Frank Mancuso. “I still think there’s a need, more than ever,” the retired Mancuso said last week. But the state had to cut back on road projects anyway with a mid-1970s budget crisis. Harrisburg Freeway was axed. The elevated section of U.S. 59 by the George R. Brown Convention Center for years contained “stub outs” — places where the new freeway would have connected. When it was recently repaved, those connections were knocked down.

The abandoned railroad tracks will now be a city bicycle trail.” 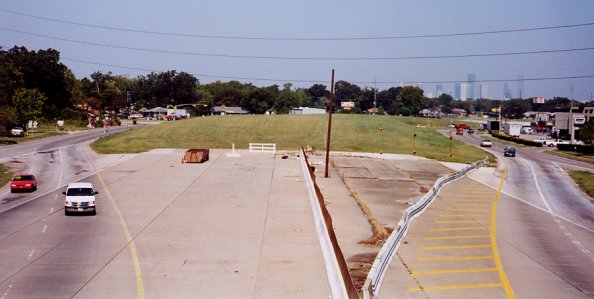 The dramatic and permanent end of the 225 freeway, just inside Loop 610. Photo taken August 2000. 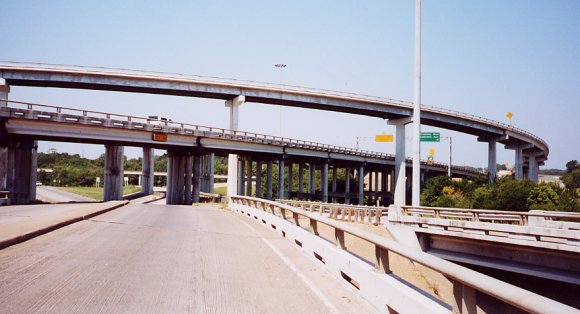 A full stack was built in the early 1970’s, prior to the cancellation. The high-flying connector shown in this view connects to the dead-end freeway. Photo taken August 2000. 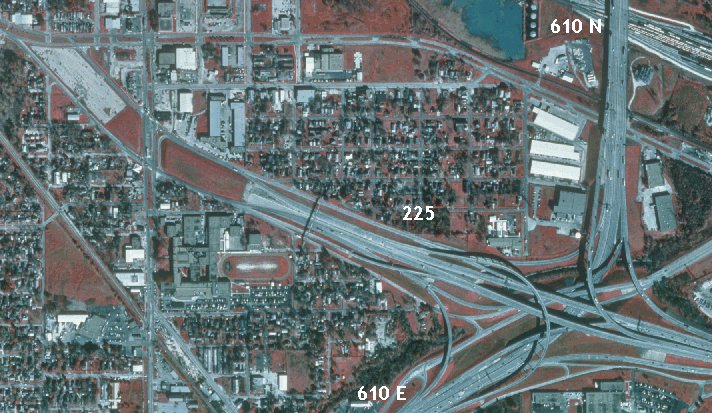 This freeway was to begin at the southwest corner of 610 and then proceed south and south-southwestward towards Bay City, which is south-southwest of Houston. A short section of feeder roads was constructed in the early 1970’s, just south of Beltway 8. By the mid 1970’s, a severe financial crisis at TxDOT doomed this freeway. The Bay City Freeway still appears on the Houston freeway planning map dated January 1, 1978, but it is gone on the map dated January 1, 1979. However, transportation planners continued to recognize the need for this facility, and in the 1990’s it was brought back to life by Fort Bend County (the suburban county to the southwest of Houston).

Throughout the 1990’s, Fort Bend County tried to get the freeway built south of Beltway 8, but no major progress was made. In August 2000, the Texas Transportation Commission officially authorized this facility as a tollway and diverted $17.8 million in funds that were slated for feeders to construction of an interchange at Beltway 8.

Then on November 7, 2000, the big break came. Fort Bend County voters approved $140 million in bonds for the Fort Bend Parkway Tollway and the extension of the Westpark Tollway to the Grand Parkway. See the Southwest Freeway web page for a general location map of the Fort Bend Tollway.

The Freeway may be brought back from the Dead!

In late November 2000, earth-shaking news arrived. The Harris County Toll Road Authority has initiated an engineering study to build the section of 122 between I-610 and Beltway 8! This would mean that the Bay City Freeway would rise from the dead. Amazing. Below is the text from the agenda of the 21-November-2000 meeting of the Harris County Commissioner’s Court.

“Request for authorization to negotiate with Brown & Root, Inc., for general engineering consultant services in connection with the extension of the proposed Fort Bend County Southwest Tollway from Beltway 8 to IH 610.” 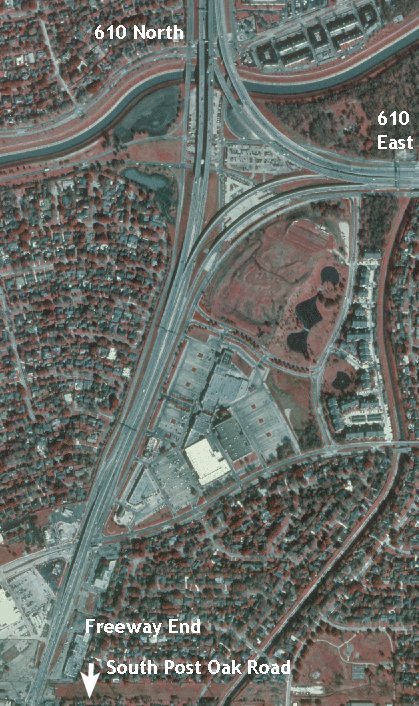 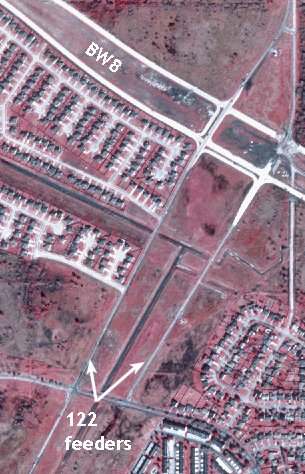 This aerial view shows the short section of feeders for the Bay City Freeway that was constructed in the early 1970’s. This aerial photo was taken around 1996, when the Beltway 8 feeder roads were under construction.

In the 1960’s, SH35 was planned as a full freeway from near downtown Houston all the way to Alvin and southward. However, projected growth in this corridor never materialized, and plans for the freeway languished until the early 1980’s when the planning process was restarted.

Feeder roads for the first section of freeway just south of I-45 were completed in 1999. As currently planned, SH35 will be a freeway from I-45 to BW8/Sam Houston Tollway. The freeway section south of BW8 has been cancelled, and will be a four-lane divided highway. Feeder roads for the Alvin bypass were constructed in the early 1970’s. Alvin officials recently appeared before the Texas Transportation Commission to beg for money to add the main freeway lanes, but it appears that no money will be forthcoming.

One of the reasons cited for the freeway cancellation is the geography of the area. The land is low-lying and susceptible to flooding, not ideal for development. Urbanization of the corridor would be a big problem in the case of a hurricane, and hurricane evacuation would be difficult. I tend to agree with the cancellation of the freeway south of Beltway 8. Unfortunately, it appears that this corridor will be urbanized anyways, since housing costs are low in this region, the Clear Lake area is running out of land, and commutes from other competing suburbs are severe.

On July 10, 1996, the following appeared in the Houston Chronicle.

“In September 1965, a consultant reported to the state highway department that the Pearland-Friendswood area ‘seems to be on the threshold of a tremendous explosion of new residential development.’The Gulf Freeway couldn’t handle all the traffic without massive jams, the report said, especially with growth that might occur because of the new NASA Manned Spacecraft Center in Clear Lake.

The freeway plans stayed low on the area agenda as other, more pressing projects were built. In 1974, a bout of inflation further trimmed area road plans and in 1976 a consultant recommended the Alvin Freeway be dropped.

By 1982, it was still scheduled for the 1990s, known as the realignment of Texas 35. In 1985, with plans growing solid, the Houston City Council agreed that the University of Houston could close Calhoun to external traffic and use the new freeway as its eastern border.” 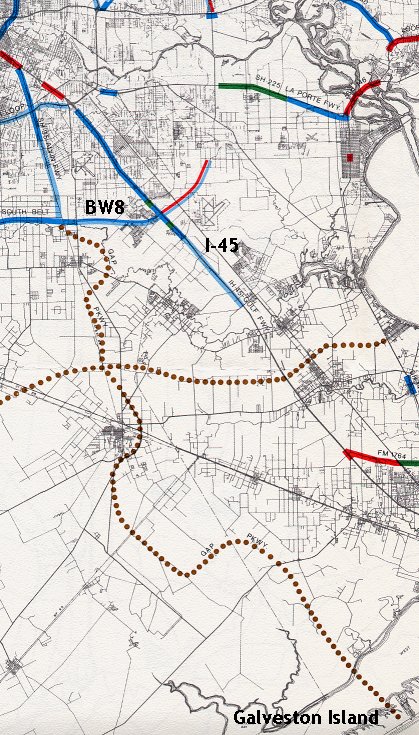 Feeder roads were built for this freeway in the 1960’s and 1970’s, and the right-of-way is just sitting there waiting for mainlanes. But it appears that the main lane right-of-way will remain pasture for the indefinite future.

Like state highway 35, the anticipated development never materialized in this corridor. Red Bluff road cuts through pasture and forest, with almost no development along its length.

In 2000, there was some talk of trying to get funding for the main lanes as a hurricane evacuation route. Harris County Judge Bob Eckels, road building champion, was reported to have requested funding during his appearance to the TxDOT transportation commission. I haven’t seen any evidence of funding, however.

But the Fairmont Parkway/Red Bluff freeway is not permanently dead. I would say it is hibernating and could come back to life someday.

In this aerial photo from about 1996, the wide right-of-way set-aside can be seen at the intersection with Beltway 8. The Beltway 8 right-of-way is especially wide at this point, with plenty of space for connector ramps. At the time of this photo, the Beltway 8 / Sam Houston Tollway main lanes were under construction.

The right-of-way for the Red Bluff freeway lies in wait. Will it ever be used?

Red Bluff Road at the Bay Area Boulevard intersection. The southbound Red Bluff lanes are in the foreground.