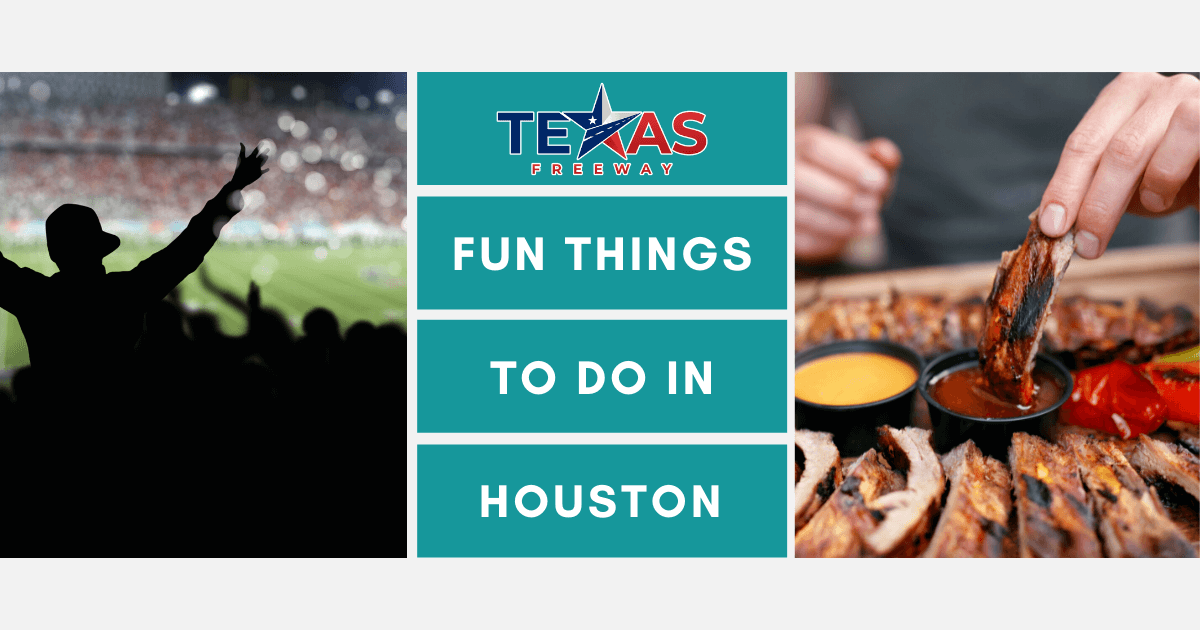 Looking for fun things to do in Houston this weekend? Houston is a popular tourist destination, but it is also a fun spot for locals as well. From the beautiful parks, eclectic choice of restaurants, vibrant nightlife, beaches, museums, and more, Houstonians have plenty of options for entertainment.

Those who love the outdoors will find plenty of parks, gardens, and natural trails. A thriving arts and culture scene is sure to have plenty to offer, no matter your interests. And with plenty of restaurants and nightlife hotspots, there’s always something to do when the sun goes down. Ready for some weekend fun? Keep reading to learn about the most exciting things to do in the city of Houston.

The city of Houston and its surroundings offer a great variety of fun activities for outdoors lovers. The warm climate makes for a comfortable experience even in the coldest parts of the year. Mild winters make for a long water recreation season, and parks have plenty to offer year-round.

Among the ten most populated cities in America, Houston ranks first in park acreage. Big Thicket Park offers an excellent experience for those who want to see reptiles in their natural habitats. Forty miles of trails in the park, along with many canoe or kayak routes, show off various wildlife. A quick trip over the causeway on I-45 brings people to Galveston Island State Park features a coastal habitat for a relaxed walking experience or for those looking to fish off the pier. Those with canine friends along will want to check out Congressman Bill Archer Dog Park, a 20-acre park with multiple ponds, running tracks, and an agility course.

With access to both the Gulf Coast and a variety of lakes, there are plenty of activities to pursue in and around the water in Houston. Lessons in both kayaking and surfing are available at Bayou City Adventures at Surfside Beach. Lake Conroe Park is an excellent place for boating, fishing, or overnight camping outside the city. Those seeking out the thrills of water parks should seek out Six Flags Hurricane Harbor Splashtown. Other nearby water parks such as Schlitterbahn Galveston and Moody Gardens Palm Beach are closer to the waterfront homes in the area.

Hiking and Biking Trails in Houston

There are plenty of hiking paths and bike trails available in and around Houston. The Bray’s Bayou Hike and Bike Trails are the longest, featuring over 35 miles of trails. They run through an extensive public green space and reach many of Houston’s other attractions like the Houston Zoo and Museum District. Buffalo Bayou Trail is 15 miles with excellent views of the downtown skyline. It has access to several parks, is fully paved, and has many shaded areas. There is even a bat colony on the trail, which you can watch emerge at sunset!

Though Houston is known for its urban hot spots, it has many green areas for hiking, biking, and kayaking. The city has plenty of dedicated green space to enjoy the long summers and mild winters.

As one of the largest cities in the United States, Houston has a significant number of different outlets designed to cater to various shopping needs. One of the largest shopping areas in the city is The Galleria located on West Loop 610, a district featuring over 375 stores, including Neiman Marcus, Saks Fifth Avenue, and Macy’s. It also has many other amenities, like an ice rink, a large children’s play area, multiple swimming pools, and several different beauty salons. The Shops at Arrive is a walkable, mixed-use area with luxury homes, restaurants, and shopping. It is home to Tootsies, a women’s clothing store that takes up an entire city block and several spas, salons, and fine dining.

Texas is home to many professional sports teams, and as its largest city, Houston has its fair share. Sports fans have plenty to enjoy with a baseball team, soccer teams, football, and basketball all year. There are several stadiums throughout the city where people can watch their favorite teams.

The homes of these teams provide great places to visit both during games and even in the offseason. Minute Maid Park is a historic setting for baseball lovers to explore. The Toyota Center, home to the Houston Rockets, is an excellent place to watch basketball and a hub for events of all different types. The Dynamo and Dash both play at BBVA Compas Stadium for soccer fans, the only downtown soccer-specific stadium in the MLS. At NRG Park, fans can watch the Houston Texans play or take in a Texas rodeo.

There’s plenty for sports fanatics to cheer for in Houston. The city has been host to some of America’s most significant sporting events, such as the MLB World Series and the NFL Super Bowl. Sports lovers will find a lot to enjoy in Houston at all times of the year, especially in September when the Astros and Texans may even be playing on the same day, just a short tram ride from one another.

Houston features a great variety of restaurants showcasing the many diverse tastes of Texas cuisine. Those seeking the state’s famous barbecue should try Barbecue Inn, which serves ribs, stacked beef sandwiches, and southern comfort food. For a taste of the gulf, Christie’s Seafood and Steaks is a popular dining destination. Traditional Cajun-style cooking can be found at institutions such as Brennan’s of Houston. Houston is a hotspot for the distinctive flavors of Tex-Mex cuisine, such as at The Original Ninfa’s.

Houston also has a strong tradition of pop-up taco stands and trucks. Off of I-69, Golden Dim Sum can be sought out for many varieties of dim sum, while Sushi Miyagi is there to satisfy sushi cravings. Vegetarians may take a liking to Hobbit Cafe, an eatery offering veggie delights with a Tolkien twist. Houston sits at the crossroads of many culinary traditions and, as such, provides plenty of unique experiences to hungry tourists and locals alike.

Houston has a wide array of hot spots for arts and culture. It boasts museums of many different kinds, with top-notch art, science, and history museums. It also has several historical sites to get a feel for history right where it happened. There is also a hot theater and dance scene, with various shows happening all the time.

Houston’s museums provide many sources of learning and entertainment for lovers of art, science, and history. As the historical home of NASA, Houston is home to Space Center Houston located along NASA Road 1, which includes replicas of the space shuttle Independence and Skylab, the first American space station. The Houston Museum of Natural Science has many fossils on exhibit, a planetarium, and a butterfly center. Houston’s Museum of Fine Arts has a broad collection of art with origins in the Italian Renaissance, pre-Columbian America, and other cultures from various regions and periods.

One of the most unique museums in the city is the Battleship Texas State Historic Site, located east of downtown on Texas Highway 225. After service in both world wars, the Battleship Texas was converted into a floating museum where visitors could explore the world’s last remaining dreadnought. The San Jacinto Battleground State Historic Site offers an intriguing look into the decisive battle in the Texas War of Independence for Texas history.

Houston’s theater district is home to various venues with performances for all kinds of different crowds. One of the newest and largest of these is the Hobby Center for the Performing Arts. The stage plays host various events such as Broadway shows, concerts, dance performances, and lectures. The Miller Outdoor Theatre also plays host to multiple types of performances and is free to attend year-round. The Cynthia Woods Mitchell Pavilion sits outdoors next to a forest and has been rated as the number one concert amphitheater globally by Pollstar Magazine.

The city also has quite a bit to do in the evenings. For example, one can visit the Cezanne Jazz Club for a mellow experience. Downtown, one can find the Nightingale Room, a bar with a speakeasy theme. Just to the east, The Secret Group is a small venue with an extensive range of acts, from musicians to comedians and creators. The Raven Tower features a large bar and patio for music and games, in addition to the titular tower itself with its incredible views of the city. Whatever you are into, Houston is a city with a lot to offer at all times.

There are many fun things to do in and around Houston. The city provides ample opportunity for fun times, from locals spots to world-famous tourist destinations. It has outdoor space, even right in the middle of the town, and plenty of places to enjoy the water as well. It has a thriving culture scene, is a regular stop on many touring bands’ schedules, and has enough sports teams to have something going on year-round. There are restaurants and bars and some fantastic shopping opportunities for high-end luxury brands and unique boutiques. People of all ages and interests can find unique experiences in this big city.