Upgrading 183 to a freeway was a tremendously challenging task. West of I-35, 183 was a heavy commercialized strip on a right-of-way about that ranged from 120 to 150 feet wide. Massive and costly business displacements were required to clear a 300 ft wide right-of-way for the freeway. Between I-35 and Loop 1 (Mopac Boulevard), displacements would have been too severe, so the freeway was constructed on an elevated viaduct.

Approximately 3 miles of freeway is currently under construction in north Austin, extending the freeway north of Ranch Road 620 (which will become SH45 tollway). North of 620, 183 will be built on new location as a tollway. Look for construction to begin in 2003.

As of January 2002, most of the projects to upgrade 183 east to a freeway have been funded. However, there are still about 2 unfunded sections. 183 east leads to the new Austin airport, which opened in May 1999, and full freeway access to the airport is needed. The first contract to upgrade this section of freeway, a $10 million interchange at Bolm Road (just north of the Colorado River crossing) was awarded in July 2001.

South of the airport (SH71), 183 is designated to become a freeway, but that should happen after 2010 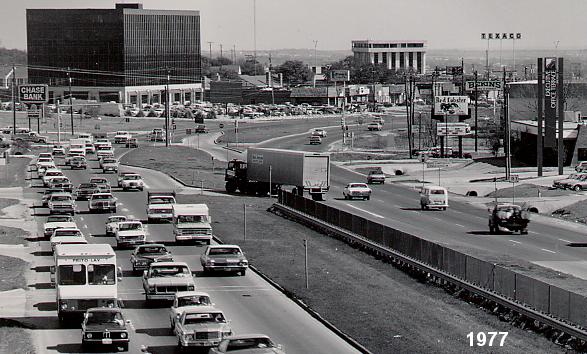 (Click for high resolution 107k). Photo taken 10-May-2001.
These two photos compare the exact same location in 1977 and 2001, looking east just east of Lamar. In 1977, 183 was a six-lane highway with heavy traffic, frequent traffic lights, and heavy commercialization. In other words, a driver’s nightmare. The freeway was completed in 1996. The section shown became part of the long elevated structure west of IH-35, although the location shown is partially on embankment rather than an elevated viaduct. The feeder roads are at ground level and are not visible.

Photo above contributed by Robert Miller of Austin

(Click for high resolution 213k). Photo taken 8-May-2001.
These views both look north from south of Braker Lane. As the 1993 photo shows, work was underway on the feeder roads. 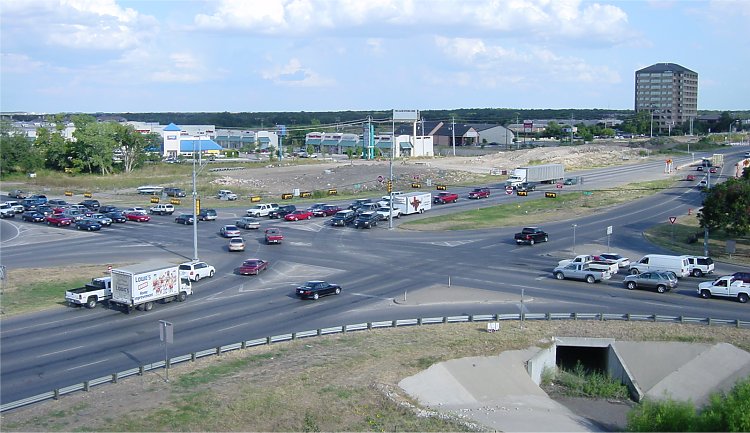 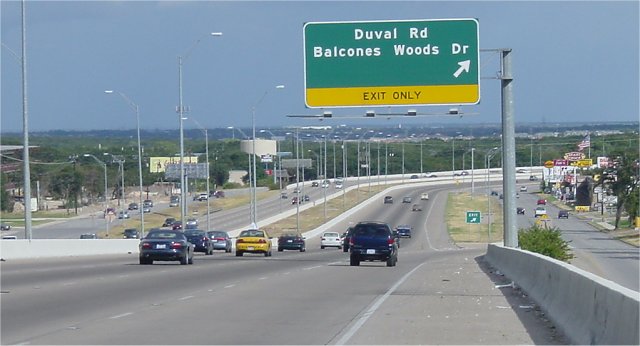 C. This is a typical section of 183 north of the Loop 1 interchange. The freeway has six main lanes, six lanes of feeders, and a grassy median strip. The future use of the median space is presently under study. This view looks south. Photo taken 26-August-2001.

(high resolution 80k) E. View of the stack at Loop 1 (Mopac), with downtown Austin in the background. Image contributed by Robert Miller of Austin. 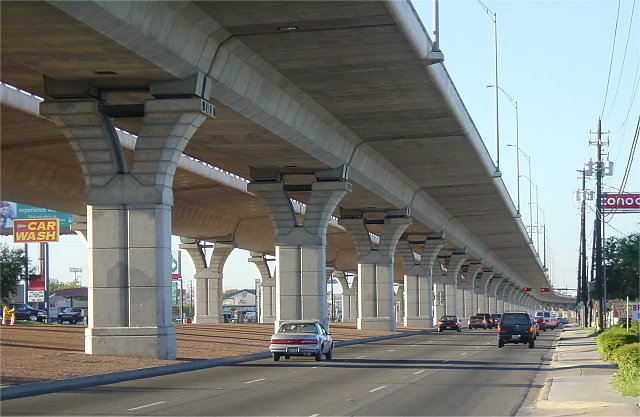 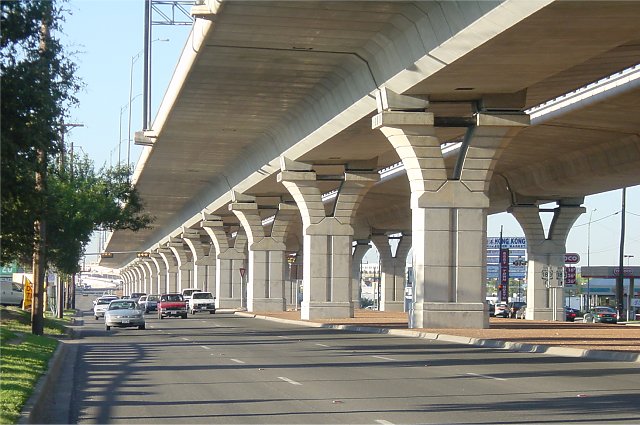 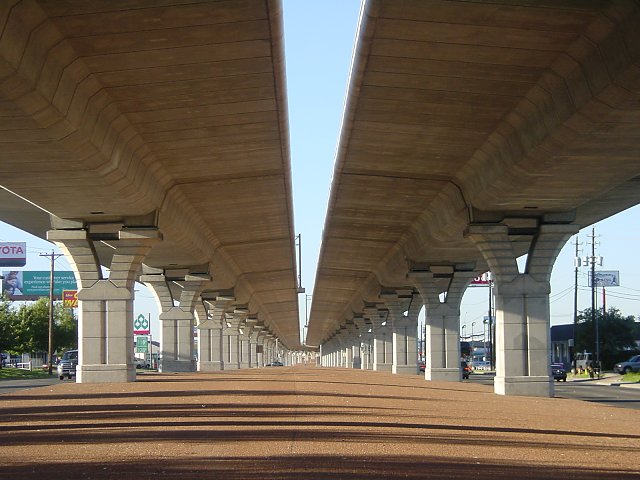 F. Between Loop1 and I-35, the heavy commerialization of the corridor and narrow right-of-way made it necessary to construct the freeway as an elevated viaduct. The freeway main lanes are positioned over the feeder roads. The elevated structure has visually pleasing support beams and the roadway structure is a sleek-looking segmental structure – not the pre-fab concrete beams that you would normally find in Texas. The structure was opened in 1996. Top photo taken August 2000; lower 3 photos taken 17-October-2001. 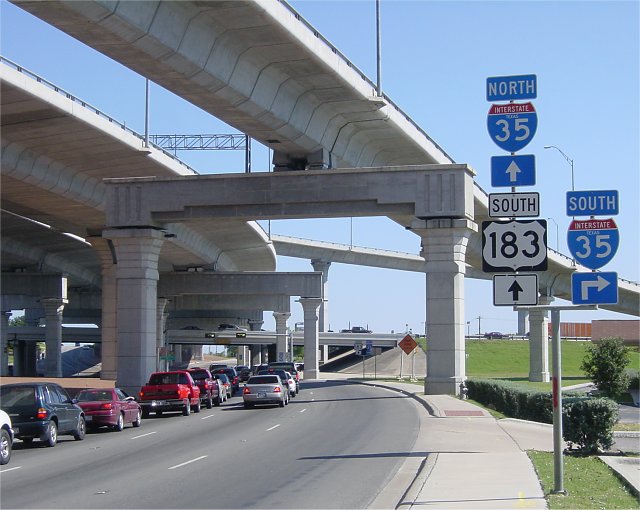 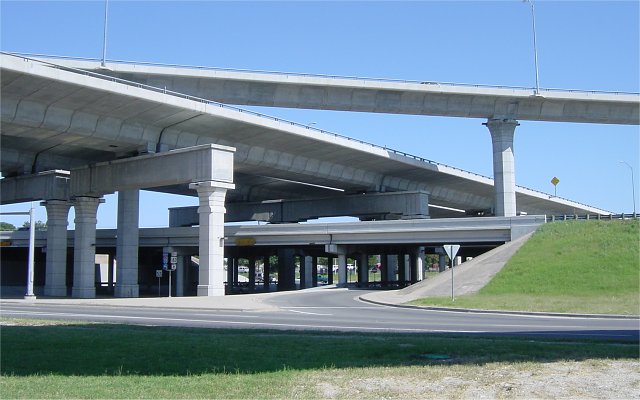 H. 183 at Interstate 35. This view looks northeast at the 4-level interchange. Notice the sleek connection ramp, which looks more like a California-style ramp rather than a Texas-style ramp. The ramp is a segmental structure, not cast-in-place concrete, however. This interchange opened in 1997. Photo taken 7-October-2001.

(click for high resolution) I. Looking east along the freeway at the present freeway terminus. At left, the highway section of 183 can be seen. New right-of-way will be taken on the right. Construction to upgrade this section to a freeway should begin in 2003. Photo taken 14-October-2001.

J. Intersection at US 290, looking north along 183 (which is at ground level). A five-level stack with 6 direct connectors is planned for this intersection, but funding is not in place and the interchange probably won’t be built until after 2010. Photo taken October 14, 2001. 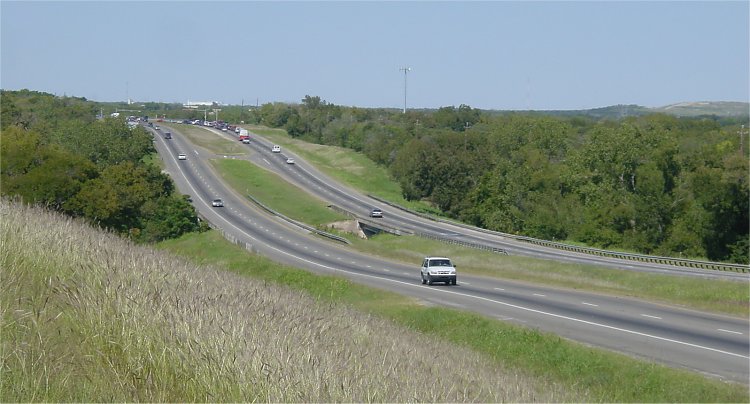 K. Four lane highway section in east Austin, south of MLK road. 183 East will be upgraded to a freeway. Traffic is horrible on this section of 183 during rush hour. The freeway can’t come soon enough. Photo taken October 7, 2001. 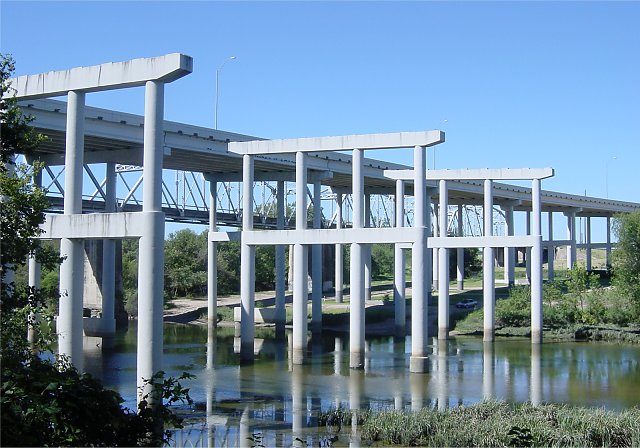 L. Who stole the bridge deck? These piers have been in place since the 1980’s, awaiting funding to build the freeway main lanes. Photo taken October 14, 2001.

M. 183 just north of 71. This will be upgraded to a freeway. There will be substantial business displacements to make way for the freeway. Photo taken October 14, 2001.