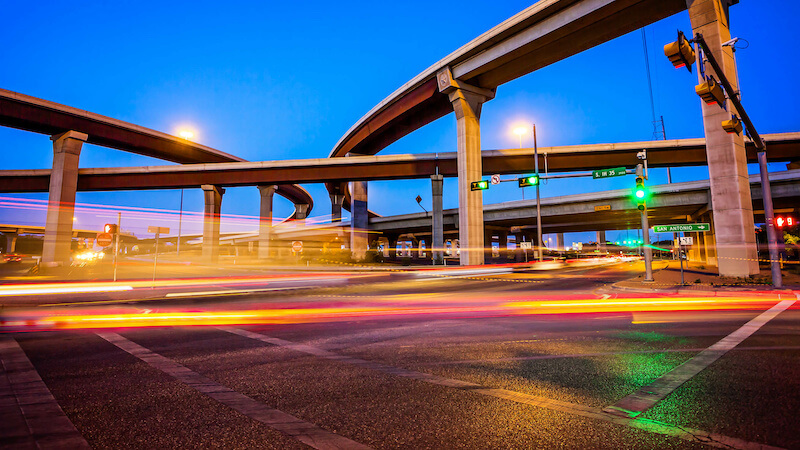 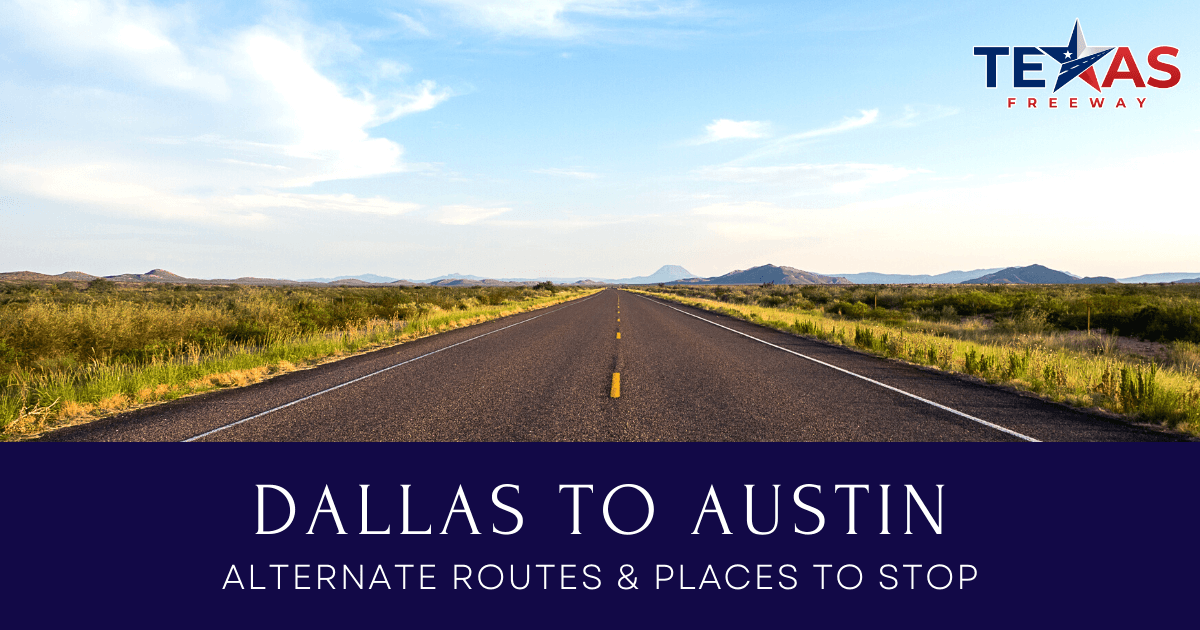 Planning an Austin to Dallas road trip and want to avoid the stress of the interstate? The most direct route between the city of Dallas and Austin to the south is a 195-mile stretch of IH-35. It’s a straight shot from city to city, but ongoing construction on the interstate can create delays. And while all of Texas’ freeways offer exciting scenery, the best views between Dallas and Austin city limits are found on the side roads. Keep reading to learn about the three possible routes, what scenery to expect, and where to stop along the way.

U.S. 281: The Scenic Route from Dallas to Austin

This route is a five-hour drive, although some drivers might break it up into a few days to take full advantage of the attractions along the way. From Dallas to the fun-filled things to do in Austin, Highway 67 and U.S. 281 is approximately 245 miles of winding hill country roads through picturesque farm towns, historic tree-lined communities, and quaint downtown squares.

While longer both in miles and time, this scenic route is well worth the drive — especially since you won’t have to battle traffic on I-35 in Waco. This geographically unique region of Texas tells a story written in rock, forests, rivers, and stone. It is a relatively direct route passing through open farm and ranch country. U.S. 281 crosses the meandering Brazos River and skirts Big Rocks Park to glimpse the Fossil Rim Wildlife Center. 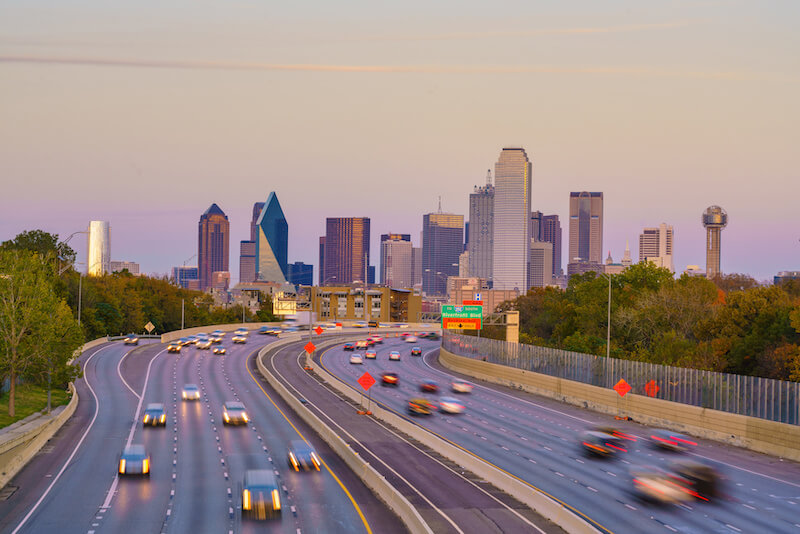 An ancient sea once covered Texas. During the Lower Cretaceous period, marine deposits developed into various limestone, petroleum, natural gas, and sandstones — the basis for the Glen Rose Formation. Dinosaur Valley State Park sits within this formation and just northwest of Glen Rose, Texas. Dinosaur Valley State Park is a 1,524-acre park that crosses the Paluxy River and is most widely known for the dinosaur footprints found in the area in 1908. It is a park with stunning views and breathtaking foliage where one can camp, hike, bike, and walk in the tracks of dinosaurs.

Accredited by the American Zoo and Aquarium Association, the preserve strives to conserve species in peril. Fossil Rim conducts scientific research into conservation methods. The park was founded in the 1980s and is now home to over 1100 animals from 50 endangered animal species, including the black-footed cat, cheetah, the southern white rhino, giraffe, wildebeest, and bongo.

The historic small-town charm of Hico, Texas, guarantees an afternoon of fun. As you enter downtown Hico, you will find James Rice’s statue of Billy the Kid. Also downtown is the Billy the Kid Museum, celebrating the life of the Wild West Legend — a.k.a. William H Bonnie.

The Hico Retrospective Museum in the Blue Star Trading building is a surprising art hub that displays historical photographs and items. At the same time, restaurants and shops throughout the town serve as living galleries of local art. The boutique site Silver Spur Winery sits opposite historic Peppermint square.

If you only have time for a small snack, grab a sandwich or coffee and pie at the Koffee Kup, whose motto is “Pie Fixes Everything.” As you continue your journey out of town, you will pass over the Bosque River and City Park.

Don’t forget to gas up or charge up at one of four EV stations before leaving Hico for the solitary drive along U.S. 281, also known as American Legion National Highway.

Lampasas, Texas, is unique. Although governed as a metroplex (combined with Temple and Foot Hood), Lampasas’ history and culture remain distinct. Founded in 1883, Lampasas is most famous for its seven natural mineral springs, fed by water flows from Marble Falls limestone and Sulphur Creek. These pools transformed the Santa Fe railroad stop into a popular health resort in the 19th and early 20th centuries.

The mineral pools are accessible through Hancock Springs Park, one of ten parks in the Lampasas area. And located near the natural pools is the Hanna Springs Sculpture Garden in Campbell Park, a favorite of the city’s 7,291 residents.

Often called the “Riverwalk of Lampasas,” WM Brook Park provides the town with a unique way to enjoy the Sulphur Creek River. Pedestrians stroll along the suspension bridge and attend productions at the Ruth Akin Outdoor Theater.

The celebration of outdoor beauty in Lampasas continues with a series of downtown Urban Art paintings known collectively as The Murals, which highlight Lampasas’ history, culture, and heritage.

The Side Roads from Dallas to Austin

This route gets travelers off of I-35 and onto the side roads between Dallas and Austin. To begin, take the I-35W spur from Fort Worth toward Highway 77. Meander through east-central Texas, skirting Waco, Temple, and Taylor, by Highway 95, then Highway 290, and driving into North Austin. You will pass through about a dozen small towns and many municipalities. The drive without stops takes 4.5 hours or roughly 225 miles, but people who want to fully immerse themselves in the history along the way will take longer.

Italy, Texas has a storied past. The small town is located just off Interstate 35E, about 15 miles south of Waxahachie. Settled by the Aycock Brothers, the settlement grew soon after, becoming a stop on the Missouri, Kansas, and Texas Railroad. The railroad became essential to the cotton trade that supported Italy and the area. At its height in 1920, Italy had five cotton gins, a cottonseed compress, and a cottonseed oil mill. Italy’s buildings and remnants remain authentic architectural examples of Northern Texas’s early 20th-century cotton era.

Italy has its share of “Ghost Signs,” faded signs painted on brickwork – images of days long past in many small Texas towns. Italy is also known for its restoration and rededication of the historic Italy Colored City Hall, founded in 1953.

An outdoor living natural history museum, the Waco Mammoth National Monument highlights Central Texas’ past. Open to the public. The Ice Age Dig Shelter houses the fossilized remains of six Columbian mammoths in situ and other animals from that era.

Cameron Park, gifted to Waco in 1910, is considered one of Texas’ most expansive parks, and it covers over 400 acres, including the Cameron Park Zoo.

Want to stretch your legs with a little bit of shopping? Why not stop into Magnolia Market at the Silos and look for a glimpse of the famous DIY-ers. Looking for a little local flare? Try the dozens of separate artisan stalls housed within the Spice Village nestles in the old 1908 Waco Hardware Building.

Over the past decade, the City of Taylor has developed a strong connection with the film and entertainment industry. Maybe because of its nostalgic atmosphere or robust infrastructure, Taylor has served as a general set location for over 50 Hollywood and Indie films. These included Transformers-Age of Extinction, Friday Night Lights, The Rookie, and Heartbreak Hotel. And, was home to animator Tex Avery, Governor Dan Moody, and actor Rip Torn.

Downtown Taylor is a step back in time combined with thrifty shopping. The Heritage Square Farmer’s Market offers locally sourced products every week of the year. Perfect for road-trip snacking!

I-35: The Road Most Traveled

Traveling from Dallas to I-35 in Austin is the most direct route for this trip. It is also, technically, the shortest for the 195-mile or 3-hour trek. This route travels exclusively over Interstate Highway roads, where gas and EV stations are plentiful, and fast-food restaurants lurk at almost every stop. However, depending on the time of day traveled, it is not always the fastest route.

Admittedly, traffic is part of being on the road, and Interstate 35 is no different. And when morning or evening slow-downs (“rush hour” to city folk), combined with ongoing construction projects, delays are easy to come by. With some clever planning, drivers can wait out the traffic at some of these interesting attractions along 35.

Located just south of Dallas, Waxahachie is an east-west hub. The historic city is also the perfect place to stretch your legs and take a quick tour of the spectacular Ellis County Historic Courthouse. This expansive building is listed as eighth on Texas’ list of outstanding architectural achievements. Surprisingly, Texas has 225 landmark courthouses, more than any other state — 86 of which are on the National Register of Historic Buildings.

The historic courthouse is reminiscent of a fairytale castle with fascinating turrets and spires, and it was “state of the art” for its time. Seventy men constructed the 24,000 sq. ft. building in 1897 from over 2 million red bricks. This massive edifice stands nine stories, with a working clock tower and an 800-pound bell.

It is noted architecturally for its stone sculptures and intricate stone carvings, cast ironwork throughout the building, and crown molding on the first floor.

The building is a working courthouse with three floors dedicated to city services.

Czech Stop might look like just another gas station from the road, but it’s so much more. The Czech Stop and Little Czech Bakery is the best-known secret in Texas. Located just about 75 miles south of Dallas, at Exit 353, it is the perfect place for a pit stop or to stretch your legs.

The Czech Stop has been a favorite of weary travelers since 1983. The Bakery promotes the Czech heritage of West Texas through delicious baked goods and friendly service. Warm delicacies, known as kolaches, draw in thousands of travelers a day from I-35. A kolache is a sweetish pastry puff that holds various meats, cheeses, and sweets. The most popular ones feature fresh fruit filling and cream cheese icing.

The Little Czech Bakery also sells cookies, sweets, brownies, cobblers, and pies, and there is even a Hummingbird Cake. The Czech Stop is so famous that they even ship around the country to quelch the kolache-cravings.

The main Chalk Ridge Falls trail is roughly 2.5 miles and well used. Partly paved, it runs parallel to the Lampasas River and is rated “easy.”

Also, a part of the park is a more challenging trail. The Chalk Ridge Loop is a moderate-rated 3.5 mile or 1.5-hour trek with a steep bank at the river crossing. It features two waterfalls and a “swing bridge.” When walking the trail, take caution. High rains and dam water releases can flood the trails. The Loop is suitable for walking and running. Leashed dogs are welcome both in the park and on the trails.

Which Route Is Right For Your Dallas-to-Austin Road Trip?

Everything is bigger in Texas. When driving through a state that extends 801 miles from north to south and 773 miles from east to west, there is much to see. That is certainly true when considering the neverending sights, towns, communities, breathtaking views, and historical monuments that populate the state.

We drive to get somewhere most of the time, but occasionally we have the time to take the scenic route. Whether searching for a trendy brewery like Lone Star Winery and Chupacabra Craft Beer or local art at Salado Glassworks in downtown Salado — smaller communities are jewels of the Lone Star State.

Next time you pass through town, stop for a few minutes to stroll around the beautiful downtown square of Georgetown. Even if you are only looking for a faster way from point A to point B, Texas will amaze you if you take your time.